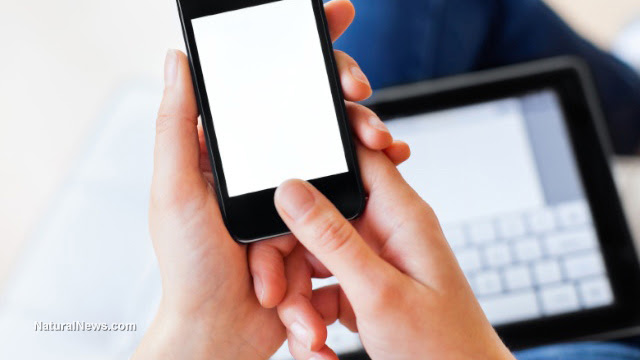 (NaturalNews) Scientists are increasingly sounding the alarm over an easily overlooked effect of becoming addicted to mobile devices: Parents are neglecting the emotional needs of their children, possibly damaging their mental health as a result.

"Children of all ages use the same adjectives to describe how they feel when they are competing with screens for their parent's attention," said Catherine Steiner Adair of Harvard University, and author of The Big Disconnect: Protecting Childhood and Family Relationships in the Digital Age. "Angry, sad, frustrating, and lonely were the words used over and over."Steiner Adair is just one of many researchers now zeroing in to ask the question: What actually happens to children whose parents are always plugged in to their devices?

An informal preschool playground survey by ConsumerWatch yielded results in line with recent psychology research."How do you feel when your mommy and daddy are on the phone?" the children were asked."Sad," said one 4-year-old."Kinda sad," her friend agreed.And with good reason: According to a recent international study by Internet security company AVG/Location Labs, one-third of children believe that their parents spend as much time (or more) with their devices than with them. Thirty-two percent said they feel unimportant when their parents are distracted from interacting with them by a phone, and 54 percent said that their parents check mobile devices too often.Steiner Adair's research had similar findings."I feel like I'm just boring," said one child that she interviewed. "I'm boring my dad because he will take any text, any call, any time, even on the ski lift."It's not just in the nebulous, hard-to-define realm of self-image that children suffer. Studies have shown that parents respond more harshly to their children while looking at screens than they do when not distracted.Another study, conducted by researchers from Boston Medical Center, had complementary findings. The researchers observed 55 groups of parents and children at various fast-food restaurants, and observed that 40 of the parents immediately pulled out mobile devices upon arrival, then paid attention to those devices for nearly the whole meal. Unsurprisingly, the children of those parents acted out more, in an effort to get attention.

Parents distracted by their phones also place their children's physical health at risk."We've seen about a 22 percent spike in preventable accidents with young children and caretakers using their digital devices," Steiner Adair said.Certain situations are simply too dangerous for cell phone use, she said, such as when children are climbing a jungle gym or a toddler or infant is in a bath."Your reaction time and attention is not the same when you're texting or talking on a cell phone," she said.Parents who are addicted to their own devices also make it more likely their children will have the same problem, psychologists warn. And studies have shown that children who spend too much time in front of screens are more likely to have social, emotional and intellectual problems.Psychologists emphasize that being more present for your children does not have to mean giving up your devices entirely. Steiner-Adar urges parents to set aside certain "critical times of the day" as device-free. She specifically suggests when taking kids to or from school, bed or bath time, and the first hour after parents get home."They should walk in the door unplugged and use the first hour they're home as time to reconnect with the family," she said. "Kids hate the phrase 'just checking' that parents frequently use to justify a very rude, infuriating behavior."Sources:http://sanfrancisco.cbslocal.comhttp://www.bendbulletin.com#