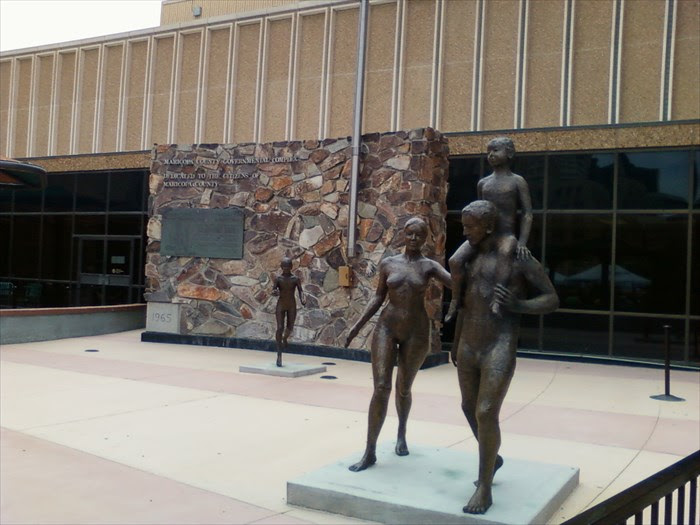 Last May I appealed “smart” meter Decision # 75047 made by the Arizona Corporation Commission (ACC). The Decision was illegal in many ways. Plus the commissioners lied repeatedly throughout the Decision.

I detailed all the lies and lawlessness in my appeal to the ACC, but the commissioners denied my appeal by not responding to it within the 20 days specified in law. (My appeal is here:http://images.edocket.azcc.gov/docketpdf/0000163221.pdf . Don't be put off by its 108 pages. The appeal is really only 17 pages long; the rest is supporting material).

I then brought the ACC’s serial lawbreaking to the attention of the Arizona Attorney General’s Office but, typically, it was not interested in enforcing the law, so my only recourse was to file an appeal in Maricopa Superior Court which I did last June 25th. (The case # is LC2015-000274.)

On July 14, Judge Crane McClennen issued an Order in the case for me to explain to him why his court had jurisdiction. This was startling for several reasons but first some background on Judge McClennen.

Doing a brief internet search on Judge McClennen, I found that he started his legal career in 1972 and has been a judge in Maricopa Superior Court since 1997. In 2008 he had the distinction of being the only judge in Arizona to not meet the Judicial Performance Standards of the Arizona Commission on Judicial Performance Review.

According to their website, http://www.azcourts.gov/jpr , “Established in 1992 by a constitutional amendment passed by voters, the Commission's membership includes eighteen members of the public, six attorneys and six judges.” This nonpartisan outfit rates judges and, in the publicity pamphlet that voters receive before an election, provides the results of their ratings to help voters make informed votes on whether to retain judges. It is very seldom that a judge does not meet the Judicial Performance Standards.

In 2013, Judge McClennen was publicly reprimanded by the State of Arizona Commission on Judicial Conduct due to a complaint brought by Mark Faull, the Chief Deputy Maricopa County Attorney.

According to their website, http://www.azcourts.gov/azcjc/ , “The Commission on Judicial Conduct acts on complaints alleging one or more judges have engaged in judicial misconduct in a particular case or circumstance.”

Comprised of six judges, 2 lawyers and three members of the public, the Commission wrote this in its public reprimand of Judge McClennen:

“The complainant alleged a superior court judge exhibited unprofessional demeanor, ridiculed trial prosecutors, and made political comments from the bench.


After reviewing the complaint, the judge's response, and the relevant recordings and transcripts, the commission found that, on two separate occasions, Judge McClennen made inappropriate sarcastic statements from the bench that violated the Arizona Constitution and the rules set forth above.”

According to a CBS 5 AZ news report on the above 2013 public reprimand, Judge McClennen was also reprimanded twice previously:

"He was accusing me of not answering his questions. He impugned my integrity," said defense attorney Eleanor Miller. She filed a complaint against McClennen last year, and the commission publicly reprimanded him after looking into it.


In 2002, McClennen was also privately reprimanded for similar conduct.

Back To My Case

I had appealed the ACC's decision to Superior Court under A.R.S. 40-254 which states in part that:

“… any party in interest, or the attorney general on behalf of the state, being dissatisfied with an order or decision of the commission, may within thirty days after a rehearing is denied or granted, and not afterwards, commence an action in the superior court in the county in which the commission has its office, against the commission as defendant, to vacate, set aside, affirm in part, reverse in part or remand with instructions to the commission such order or decision ….”

I had appealed within the thirty day period but Judge McClennen, after quoting the part of the law I just did above, wrote that:

It appears Woodward is challenging an order of the Arizona Corporation Commission issued on April 30, 2015. As noted above, a party has the right to bring an action “within thirty days after a rehearing is denied or granted, and not afterwards.” Thirty days from the date of the Corporation Commission’s order would have been May 30, 2015. It thus appears Woodward’s pleading filed June 25, 2015 is untimely, which would mean this Court would not have jurisdiction.

Incredibly, Judge McClennen made the mistake of starting the thirty day countdown from the date of the ACC's decision, not from when my appeal to the ACC was denied.

Or was it a mistake?

It is not customary for a judge to attempt to dismiss a case in this way. Usually the other side in the case would do that. So it seemed to me that Judge McClennen was doing the work of my adversaries. Adding that to his history of reprimands, I wanted a different judge.

The particular court I am in, Lower Court Appeals, runs by the Rules of Civil Procedure. There's a rule that gives a person the right to a one time change of judge just for the asking. In other words, you don't need a reason. So I filed a Notice of Change of Judge on July 27th. But I was denied because Maricopa Superior Court also operates under “Local Rules,” and there was a Local Rule that overrode the right to a change of judge that I thought I had.

However, that Local Rule (plus a state statute) did give me the right to a change of judge if I showed cause. Grounds for cause had to be “That the party filing the affidavit has cause to believe and does believe that on account of the bias, prejudice, or interest of the judge he cannot obtain a fair and impartial trial.”

That was exactly what I 'had cause to believe and did believe.' So I filed an affidavit to that affect on July 30th.

In the affidavit, I stated that in attempting to dismiss my case as “untimely,” Judge McClennen was doing the work of the defendants and therefore showing his bias. I also mentioned that his misconstruing the thirty day time period appeared intentional since he is an experienced judge who should know better.

The next day Judge Randall Warner, the Civil Court Presiding Judge to whom I presented my affidavit, ruled against me. According to him, “Bias and prejudice under A.R.S. § 12-409(B)(5) means a “hostile feeling or spirit of ill-will” or an “undue friendship or favoritism” towards a litigant.” He claimed I didn't show that. I was pretty sure I had shown a “hostile feeling or spirit of ill-will,” even though I hadn't used those exact words in my affidavit.

At this point the Rules of Civil Procedure became unclear to me, and I was unsure exactly what my options were. I also wasn't sure I wanted to spend more time pursuing this particular injustice even if I could figure out the rules, so I accepted Judge Warner's ruling. Sometimes even I give up.

Meanwhile, Judge McClennen had given me until August 7th to tutor him on A.R.S. 40-254, the thirty day time limit law. So on August 5th I supplied him (free of charge) with a detailed explanation of how that law works.

Evidently realizing that his court did in fact have jurisdiction in my case, on August 10thJudge McClennen issued an order giving the ACC until August 31st to respond to my Notice of Appeal. He also gave me until September 11th to respond to whatever the ACC filed if I so desired.

So that's where the case stands at this time.

By the way, none of what I've written above has transpired inside a courtroom. It's all done by filing papers. Because I want to be sure the documents I file get filed on the day I want them filed, I drive them down to Phoenix. I also need copies stamped by the Clerk of Court to deliver to the defendants whose offices are just a few blocks away from the Superior Court, so I drop those off while I am there.

Every time I go to Superior Court I get a real laugh out of the sculpture that's in front of the building and right next to the main entrance. Have a look at the photo at this link:http://www.waymarking.com/gallery/image.aspx?f=1&guid=7da9a4c4-d689-4a4a-b016-6683d265d391

The sculpture depicts a family who've been stripped of everything – even their clothes – by the legal system, and they are fleeing the courthouse. Too perfect!