EVERYWHERE you look, from schoolyards to the halls of government, people are glued to their cellphones. An estimated 4.6 billion people worldwide use cellphones - 300 million of them in the U.S.
The average American spends more than 14 hours a month on a cellphone, far more than the residents of any other nation. With the emergence of smart phones and apps for everything from making dinner reservations to locating public restrooms, many people can't imagine modern life without them.
Neither can I. But new technology brings new risks. Using a cell- phone while driving is distracting and dangerous, which has led states across the country, including California, to pass hands-free laws. Now, although the science is far from settled, concerns have been raised about the possible health risks of cellphone radiation.
Cellphones emit low levels of radiation. This radio-frequency radiation, measured by specific absorption rate (SAR), is how the phone communicates with the wireless network - but the radiation enters your head or body at the same time it travels toward the cell phone tower. Emitted radiation levels vary not only by make and model but also by the distance to the nearest cell tower, type of network and other conditions.
While studies cited by industry groups and the Federal Communications Commission show no correlation between cellphone use and negative health impacts, the scientific literature on the potential harm caused by cellphone radiation is far from unanimous.
Recent peer-reviewed, independent studies from around the world have found that long-term, heavy cell phone use increases the risk of brain, salivary and acoustic nerve tumors as well as decreased sperm count.
Of particular concern is the use of cellphones by children. The FCC's recommended safe levels haven't been updated since 1996, when cellphones were an expensive luxury for adults. Now cellphones are marketed to children whose heads are smaller and skulls are thinner, making them more susceptible to radiation, even at low levels. The European Parliament and health agencies in six nations (Switzerland, Germany, Israel, France, the UK and Finland) have recommended reducing children's exposures to cellphone radiation.
The FCC has posted guidelines for reducing potential risks associated with wireless devices.
The precautions include using an earpiece or headset, keeping wireless devices away from the body when they are turned on, using the cellphone speaker, texting rather than talking and buying a wireless device with a lower SAR.
While manufacturers must report SAR values to the FCC, this information is not currently given directly to consumers. Radiation levels are listed on the FCC website, but finding that information requires a difficult and tedious search.
The Environmental Working Group, the sponsor of SB 1212, has published a user-friendly radiation guide (www.ewg.org/cellphone-radiation) that shows the radiation levels of today's best-selling smart phones are pushing the limits recommended by the FCC.
It is time to start a national dialogue regarding cellphone radiation. We don't want to look back and ask why we ignored the warning signs.
That's why I have introduced Senate Bill 1212, a consumer right to know measure, which requires cell phone companies in California to list cellphone radiation levels alongside the price at the point of purchase so consumers can make better and informed choices.
In San Francisco, Mayor Gavin Newsom has introduced similar local legislation.
As we wait for the science to become more conclusive on the potential risks of cellphone radiation, it is common sense that we make this information easily accessible to consumers. As the saying goes, better safe than sorry.
Mark Leno, a San Francisco Democrat, has represented Marin in the state Senate since 2008.
http://www.eptrail.com/ci_15002176
Posted by EMF Refugee at Saturday, May 01, 2010 No comments:

Government must inform us of cell phone risk


Government must inform us of cell phone risk


A huge, 30-year study called COSMOS has been launched in Europe to determine whether cell phones cause cancer and other health problems. Meanwhile, policymakers in Sacramento are considering legislation to ensure people know how much radiation their cell phones emit. The wireless industry vigorously opposes such legislation. It argues that its phones comply with regulations, and there is no consensus about risks so people don't need to know this. Our research review published in the Journal of Clinical Oncology found alarming results to the contrary.

We reviewed 23 case-control studies that examined tumor risk due to cell phone use. Although as a whole the data varied, among the 10 higher quality studies, we found a harmful association between phone use and tumor risk. The lower quality studies, which failed to meet scientific best practices, were primarily industry funded.
The 13 studies that investigated cell phone use for 10 or more years found a significant harmful association with tumor risk, especially for brain tumors, giving us ample reason for concern about long-term use.

Do federal regulations adequately protect the public? The 1996 Federal Communications Commission regulations are based upon the Specific Absorption Rate (SAR), a measure of heat generated by six minutes of cell phone exposure in an artificial model that represents a 200-pound man's brain. Although every cell phone model has a SAR, the industry doesn't make it easy to find it. Moreover, children, and adults who weigh less than 200 pounds, are exposed to more radiation than our government deems "safe."
It is time to revamp the FCC regulations. Laboratory scientists have found harmful effects from cell phones that emit less radiation than the FCC standard. Moreover, some scientists believe that cell phones' heat transfer is not what we should fear. These researchers have found that variation in the frequencies emitted by cell phones may be hazardous.

We should address this issue proactively even if we do not fully understand its magnitude. Our government has faced similar public health threats in the past. In 1965, although there was no scientific consensus about the harmful effects of cigarettes, Congress required a precautionary warning label on cigarette packages: "Cigarette Smoking May Be Hazardous to Your Health." More specific warnings were not required until 1984: "Smoking Causes Lung Cancer, Heart Disease, Emphysema, And May Complicate Pregnancy."

Should we have waited 19 years until absolutely certain before we informed the public about these risks?

Although more research on cell phone radiation is needed, we cannot afford to wait. There are 285 million cell phones in use in this country, and two-thirds of children over the age of seven use them. Manufacturers bury the SAR within their owner's manuals, along with safety instructions to keep your phone up to an inch away from your body.
Nine nations have issued precautionary warnings. It is time for our government to require health warnings and publicize simple steps to reduce the health risks of cell phone use.
Read more: http://www.sfgate.com/opinion/openforum/article/Government-must-inform-us-of-cell-phone-risk-3190907.php#ixzz2SUBCEjO6
Posted by EMF Refugee at Tuesday, April 27, 2010 No comments: 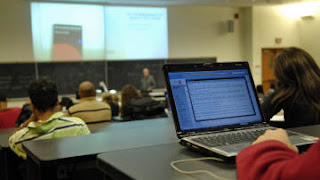 Magda Havas, a professor of environmental and resource studies at Trent University in Peterborough, Ont., works with people she says are “electrically sensitive.”

“When they are exposed to this microwave energy from an ordinary cordless phone, their heart goes crazy,” said Dr. Havas, who will appear at a meeting of the Commons health committee. “They simply cannot survive in our normal urban environment any more. They either seclude themselves in their homes [where] they have special paint that they put on their walls and fabric for their windows to keep the radiation out,” or they move to rural areas.

Microwaves have also been linked to cancer, an inability to control diabetes, sleeping disorders and a range of neurological ailments. Dr. Havas and others who fear the effects of electromagnetic energy want the allowable exposure levels reduced, and they want the government to publicize the dangers they perceive in the communication devices that exist in most Canadian homes.

Health Canada, which sets the guidelines for microwave exposure, says that as long as the recommended limits are respected, the department has no scientific reason to consider exposure to low-level radiofrequency fields, such as those from cell towers, dangerous to the public.

Bernard Lord, the former New Brunswick premier who is now the president of the Canadian Wireless Telecommunications Association, will also appear before the Commons Health committee on Tuesday.

“The wireless industry fully complies with the regulations that are in place,” Mr. Lord said. “Not only do they fully comply, the members also believe that they are safe. We are all users of this technology. Not only do we use it on a day-to-day basis with our own wireless devices in our hands, but many of us have WiFi networks at home. And you have Internet cafés with WiFi waves. It’s all around you. It’s everywhere.”

François Therrien, a spokesman for Save Our Children From Microwaves who will also appear before the committee, said the members of his group understand that cellphones are here to stay.

“But we want to make them safer,” Mr. Therrien said. “We want warnings on cellphones and we want the cellphone companies to stop selling these products to children.”
Posted by EMF Refugee at Tuesday, April 27, 2010 No comments: