The Elementary Teachers' Federation of Ontario has updated its policy position on the student use of personal electronic devices, preferring for them to be turned off and put away unless a teacher says otherwise.
That policy, which was amended at the union's annual general meeting, informs ETFO in its discussions with the government and school boards on related issues.
A portion of that policy now states that such devices, which include cellphones, should "be stored and turned off during the instructional day unless their use is directly authorized by staff."
In a separate resolution, ETFO voted to study the effects of non-ionizing electromagnetic radiation, the potentially harmful radiation emitted by cellphones. A report is due on the matter in February.
Health Canada has said that the majority of research to date does not support a link between exposure and poor health.
http://www.cbc.ca/news/canada/toronto/story/2013/08/17/toronto-cell-phone-ban.html
Posted by EMF Refugee at Tuesday, August 20, 2013 No comments: 
By Zachary A. Goldfarb, Published: August 13 E-mail the writer

President Obama liked the idea laid out in a memo from his staff: an ambitious plan to expand high-speed Internet access in schools that would allow students to use digital notebooks and teachers to customize lessons like never before. Better yet, the president would not need Congress to approve it.
White House senior advisers have described the little-known proposal, announced earlier this summer under the name ConnectEd, as one of the biggest potential achievements of Obama’s second term.


There’s just one catch: The effort would cost billions of dollars, and Obama wants to pay for it by raising fees for mobile-phone users. Doing that relies on the Federal Communications Commission, an independent agency that has the power to approve or reject the plan.
Republicans vow to oppose any idea that raises costs for consumers, while others question whether it’s appropriate to use the FCC to fund an initiative that is better left to Congress’s authority.
“Most consumers would balk at higher costs, higher phone bills, and I sure hope that this is not part of the equation that ultimately comes out,” said Rep. Fred Upton (R-Mich.), chairman of the House Energy and Commerce Committee. “If they pursue that course, there’s going to be pushback, absolutely.”
Republicans said that if the proposal moves forward, they will hold congressional hearings and pressure the FCC to side against the plan, although it’s unclear how much they could do. There are five seats on the commission — two filled by Democrats, one by a Republican, and Obama has nominated candidates for two open spots. The commission has taken the initial steps in what could be a year-long process before it decides.
ConnectEd, which seeks to provide high-speed Internet service to 99 percent of schools within five years, is a case study in how Obama is trying to accomplish a second-term legacy despite Republican opposition in Congress.
“It’s got a lot of the characteristics of big-vision policy that you really don’t get through legislation anymore,” said Rob Nabors, White House deputy chief of staff, who is coordinating executive actions.
The proposal arrived at the White House after the 2012 election, when Education Secretary Arne Duncan and Julius Genachowski, a law school friend of Obama’s who was FCC chairman at the time, broached the idea.
Inside the White House, there was interest in the policy but concern about the politics.
The proposal makes use of the FCC’s ability to charge consumers fees to fund specific priorities, such as subsidizing phone service for the poor. The program, known as the universal service fund, has received bipartisan support in Congress but has drawn criticism from some telecom companies for raising fees and from some conservatives who oppose what they call handouts.
In the case of ConnectEd, White House officials worried that Obama could be accused of raising taxes on all Americans who use phone or Internet service, amid a broader debate in which Republicans are saying he is trying to raise taxes on the middle class. The cost for the initiative is estimated at $4 billion to $6 billion, and the administration said it could work out to about $12 in fees for every cellphone user over three years.
Read more at
http://www.washingtonpost.com/politics/obama-pushes-ambitious-internet-access-plan/2013/08/13/646bf410-f321-11e2-bdae-0d1f78989e8a_story.html
Posted by EMF Refugee at Tuesday, August 20, 2013 No comments:

Jason Newfoundland
In recent years, people have been divided by conflicting studies about the risk of cancer posed by cell phone radiation. Does the current conflicting research eradicate or support the cell phone-cancer controversy?

http://www.onislam.net/english/health-and-science/health/464119-the-cell-phone-brain-cancer-controversy.html
Posted by EMF Refugee at Tuesday, August 20, 2013 No comments:

The West Virginia town where wireless signals are illegal

The West Virginia town where wireless signals are illegal

(Photo: NRAO)
Shhh! The scientists are listening to space!

Green Bank, W. Va, is a tech-savvy teenager’s nightmare. In this tiny town in Pocahontas County — population 143 — wireless signals are illegal. No cell phones. No WiFi. No radio. No Bluetooth. No electronic transmitters at all. You’re not even allowed to cozy up to an electric blanket.

The remote town is smack in the center of the National Radio Quiet Zone, a 13,000 square mile stretch of land designated by the Federal Communications Commission to protect two government radio telescopes from man-made interference. The rules, though, are most strict in Green Bank’s neck of the woods. So strict, actually, that a policeman roves the streets listening for verboten wireless signals.

It’s necessary, though. The town is home to the Green Bank Telescope, the largest steerable radio telescope in the world — and arguably our most powerful link to the cosmos. Scientists there listen to radio energy that has journeyed light years, unlocking secrets about how the stars and galaxies formed. A rogue radio signal could prevent potential discoveries, discoveries that could answer big questions about how the universe ticks.

Don’t even try using your cell phone in Green Bank. Finding service is the only thing harder than finding another human. A flip of the radio dial won’t reward you either — it’s all a steady whoosh of white noise. If you’re lucky, though, you may catch a faint flicker of the only AM station around, hosted by the Allegheny Mountain Radio Network.

First responders are the only residents allowed to use communication radios, although they’re limited to short-distance CB radios. If you get lost, one pay phone is there to rescue you — a pay phone, mind you, that people actually use. And you can search the web there, too, but you’ll have to get used to the grating ping of a dial-up modem again.

Surprisingly, a ban on all things wireless hasn’t driven residents away. It’s actually drawn people from all across the United States to settle down. Sufferers of electromagnetic hypersensitivity — a disease supposedly caused by wireless signals, but dismissed by the scientific community — have moved into the electronic dead space.

http://ca.news.yahoo.com/the-west-virginia-town-where-wireless-signals-are-illegal-191901444.html
Posted by EMF Refugee at Monday, August 19, 2013 No comments: 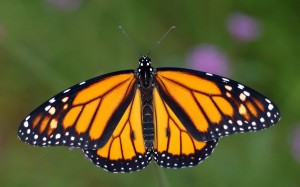 On August 21, the city of Pacific Grove will hear an appeal on the placement of an AT&T 4G cell tower next to the Monarch Butterfly sanctuary.

Pacific Grove is an overwintering area for the monarch butterfly. Each year, these butterflies migrate thousands of miles from Canada to Pacific Grove and other special places in the Western Hemisphere. They arrive and stay through several reproductive cycles, and then continue their travels.
Pacific Grove has an ordinance specifically protecting monarch butterflies. It has a small area set aside for the butterflies as a sanctuary, but the butterflies roost and feed in trees in the surrounding area. Many travel books feature this sanctuary to attract visitors from all around the world.
AT&T wants to put a permanent set of cellular 4G antennas at Wilkie’s Inn, (1038 Lighthouse Avenue) next to the butterfly sanctuary. This is one of the few monarch habitats the butterflies rely on.
Here’s two studies that indicate insects are harmed by radiation.  Food collection and response to pheromones in an ant species exposed to electromagnetic radiation found exposure to radiation caused colony deterioration and affected social insects’ behavior and physiology. Another study Oxidative and genotoxic effects of 900 MHz electromagnetic fields in the earthworm Eisenia fetida found radiation caused genotoxic effects and DNA damage in earthworms.
Please take action to help stop these antennas in Pacific Grove, California. Sign this petition by Tuesday, August 20.  Read more and sign the petition.


1
Quick Take: Many of us (most of us?) have assumed that the smart meter wave would roll through the U.S. and then on to Europe and the rest of the world. Now comes a report from a German agency that says smart meters don't make economic sense in that country. This despite the fact that EU countries are under a mandate to connect 80% of their customers to smart meters no later than 2020.

Not only could this have major repercussions in Europe – it could also rebound back to the U.S., where roughly two-thirds of all meters are still the old-fashioned kind. It's not hard to imagine that this negative assessment will give some U.S. regulators pause.

Still, all is not lost. A separate report from a pan-European trade association lays out the steps European utilities can take to make smart meters a reality, as you can read by clicking the link. - By Jesse Berst

Ernst & Young has authored a study on behalf of the German Federal Ministry of Economics analyzing the costs and benefits of a full smart meter rollout. It concludes that smart meters are not in the interest German consumers.

European Union (EU) climate mandates require that member countries connect at least 80% of customers to smart meters by 2020. However, the implementation may be subject to an economic assessment, such as the one just published.

The study says the savings from smart meters do not justify the costs, particularly for residential customers. It therefore concludes that it would not be reasonable to impose the 80% target on German utilities. Instead, it recommends an alternative deployment whereby smart meters would be installed only when an existing meter needed to be replaced anyway.

The Federation of the German Energy and Water Industry (BDEW) applauded the results, which confirm the long-standing position of that industry Association.

Jesse Berst is the founder and Chief Analyst of SGN and Chairman of the Smart Cities Council, an industry coalition.

http://www.smartgridnews.com/artman/publish/Technologies_Metering/Nein-German-ministry-rejects-smart-meters-5958.html#.UhC_6RbzSoV
Posted by EMF Refugee at Sunday, August 18, 2013 No comments:

Elementary teachers want students to turn off their cell phones


Elementary teachers want students to turn off their cell phones

Elementary school teachers want students to turn off their cell phones.
The Elementary Teachers Federation of Ontario passed a resolution Friday that cellphones should be turned off in classrooms unless a student gets special permission.
The Toronto District School Board allowed phones back into the classroom in 2011 after a ban four years earlier.
The union also passed a motion which would require Wi-Fi transmitters in schools to be clearly marked.
The motions are non binding.
Health Canada says there is no strong evidence that shows exposure to low level radio frequency energy causes health problems.
http://www.680news.com/2013/08/17/elementary-teachers-want-students-to-turn-off-their-cell-phones/