MAST PULLED DOWN BY "HEROES"?

Hey, when the government is bought by the cell phone industry and is not doing anything to protect the citizenry from this toxic electromagnetic radiation, what do you expect people to do?


MAST PULLED DOWN BY "VANDALS" 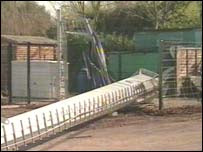 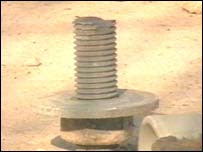 A controversial mobile phone mast in Devon has been pulled down by vandals, causing damage put at £30,000. The mast, at the Elmore football ground in Tiverton, had been the object of a campaign by local people concerned about health risks.

The 15 metre-high, three tonne mast was only put up last August. Hutchison 3G, which owns the mast, has said a new unit should be up in a week and has offered a £5,000 reward for information about what happened.

Several bolts fixing the mast to the ground were cut off. The vandals used special equipment to rip the mast off its base and pull it down. Wire netting around the mast was cut neatly, and just enough of the 14 bolts holding the mast in place were cut off to allow the structure to be pulled down.

Gary Holley of Elmore Football Club said: "The base bolts have been cut off by a disc cutter. It has been pulled over by vehicle of some kind and there was a rope left around about three quarters of the way up."

Mid Devon District Council had initially refused permission for the operators to use it, but the government overruled that decision. Councillor David Nation said: "It shows just how frightened people are by these masts. This is not just mindless vandalism, it is a criminal act which cannot be condoned.

"But the fact that people are driven to this indicates just how important it is that councils and the government should take note of what people are saying."

Hutchison 3G said bringing down the mast was a dangerous, irresponsible and criminal act.

A woman living near to the site, who did not want to be named, said the destruction of the mast had probably hampered the efforts of using legitimate protests against mobile phone masts.
Posted by EMF Refugee at Wednesday, February 15, 2006 No comments: Links to this post

I wrote this message to the WorldCitizen Group <
http://groups.yahoo.com/group/worldcitizennet/ > back in
October 2002. The quote is from the Book "Vital Lies,
Simple Truths" by Daniel Goleman. I am including a quote at
the end of this by B. Blake Levitt from her book
Electromagnetic Fields, which runs along the same lines
regarding to the psychodynamics of Denial - specifically
with regards to EMFs.


It is time to stop pretending that their is nothing wrong
with our Modern Life Style. We must become empowered to
make some serious changes.

From the foreword to Daniel Goleman's book, Vital Lies,
Simple Truths: The Psychology of Self-Deception (1985):


"We live at a particularly perilous moment, one in which
self-deception is a subject of increasing urgency. The
planet itself faces a threat unknown in other times: its
utter destruction. Whether that death be the quick one,
from nuclear war and the catastrophic changes that would
follow, or the slow ecological one, from the inexorable
destruction of forests, arable land and usable water, the
human capacity for self-deception will have played its
part.

Consider the rapidly growing ecological deficit - soil
erosion, shrinking forests, grasslands turning to desert,
depletion of the atmosphere's protective ozone layer, and
the poisoning and drying up of water tables.

Our habits of consumption, on a worldwide scale, are
destroying the planet's resources at a rate unparalleled in
history. In effect, we are destroying the planet for our
own grandchildren, simply by our heedlessness of the links
between how we live and the effects on the planet.

The virgin rain forests of the Amazon, for example, are
being destroyed at an incredible rate, to make room for
cattle to graze. Those cattle are raised, in the main, to
feed the world's hunger for beef.

How many hamburgers does the destruction of an acre of
virgin Amazon jungle yield? We do not know: the answer
could be determined, but that bit of homework has not been
done.

And that is the point: we live our lives oblivious to the
consequences for the planet, for our own descendants, of
just how we live. We do not know the connections between
the decisions we make daily - for instance to buy this item
rather than that - and the toll those decisions have on the
planet.

It is feasible to weigh, more or less accurately, the
specific ecological damage involved in a given act of
manufacturing. And having done so, to generate a standard
unit that would summarize how much ecological damage has
gone into the making of a car, say, or a box of aluminium
foil.

Knowing that, we would be able to take more responsibility
for the impact on the planet of how we choose to live on
it. But there is no such information available, and even
the most ecologically concerned among us do not really know
the net effect on the planet of how we live. And, for most
of us, being oblivious to that relationship allows us to
slip into the grand deception, that the small and large
decisions in our material lives are of no great
consequence.

The question, then, is what can we do to break out of these
self-deceptions, and the others that have us in their web?
The answer this book proposes is to understand, first, how
it is that we are caught at all. For self-deception, by its
very nature, is the most elusive of mental facts. We do not
see what it is that we do not see.

Self-deception operates both at the level of the individual
mind, and in the collective awareness of the group. To
belong to a group of any sort, the tacit price of
membership is to agree not to notice one's own feelings of
uneasiness and misgiving, and certainly not to question
anything that challenges the group's way of doing things.
The price for the group in this arrangement is that
dissent, even healthy dissent, is stifled. Take the case of
the shuttle explosion. The night before the launch two
engineers strongly objected, saying that the seals on the
propulsion rocket were not designed to bear up in cold
weather. Their objections were never passed along to those
at higher levels, many of whom already knew of the danger,
but had chosen to discount its import. There had been
several delays already, and people were questioning whether
NASA could ever make the shuttle work well enough to pay
its own way.

In the inquiry after the disaster, when the same two
engineers testified about what had happened, they were
demoted. And yet what they had done was in the highest
interests of the entire mission. Had they been heard, the
tragedy would not have occurred. Only after public outcry
were the engineers reinstated.

Therein lies the lesson for those who want to break through
the cocoons of silence that keep vital truths from the
collective awareness. It is the courage to seek the truth
and to speak it that can save us from the narcotic of
self-deception. And each of us has some access to some bit
of truth that needs to be spoken.

To break out of this trap requires, as Elie Wiesel has put
it, the courage to speak truth to power."

"The Dynamics of Denial

When we think of denial what comes to mind is someone
knowing the "truth" but pretending otherwise. But in fact,
the process of denial is a complex pychological dynamic in
which a person is actually not experiencing his or her
experience.

Denial has a useful healthy purpose for the human ego
structure. When a loved one dies for instance it is a way
to keep overwhelming fear and grief at bay until one can
come to terms with the loss. A less healthy example of
denial is the alcoholic who rationalizes continued drinking
in various delusional ways.

Those who study the process of lying have observed that
whole communities, organizations, and various official
bodies can manifest group denial, which seems to occur most
often when the subject under discussion is complex or has
important implications for the status quo. Organizational
denial is closely linked to another unproductive process
that leads to group paralysis. Called 'groupthink,' this
psychological dynamic can develop within a decision-making
organization in which loyalty to the group or the need to
reach a consensus becomes more important than solving the
problem at hand. It can be a subtle phenomenon, which
participating individuals often fail to recognize, but its
byproduct is the suppression, elimination, dismissal, or
reinterpretation of dissenting information. Groupthink
requires several forms of lying to maintain the status quo,
including the ignoring or omission of facts, selective
memory, and denial. The subject of electromagnetic fields
has collided with organizational denial and groupthink more
often than not, and continues to do so.

One would hope that any errors made were in favor of
consumer safety, health, and property values, but this has
not been the case, ESPECIALLY IN THE PROBUSINESS PRACTICES
OF THE BUSH AND REAGAN ADMINISTRATIONS
Posted by EMF Refugee at Wednesday, February 15, 2006 No comments: Links to this post