Multiple radio signals enough to cause physical and psychological problems 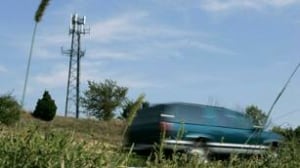 Cellphone towers have become part of the landscape, but a new report says the radiation coming from them poses a threat to human health. ((Dick Whipple/Associated Press))
"The bottom line is that these very chronic low-level intensities are not biologically inert," study author Blake Levitt told CBC News.
Levitt, a medical and science journalist, has been studying radio frequency exposures since the 1970s, and has written two books on the subject. Her latest article appeared online Friday in Envrionmental Reviews, a Canadian journal that publishes peer-reviewed papers summarizing previous scientific studies on environmental topics.
Levitt says the exponential growth of wireless use and the accompanying low-level signals are a concern. The paper notes there are now 5.5 billion cellphones in use worldwide. In addition to the cell signals, there are also Wi-Fi networks and Wi-Max, which began rolling out in the U.S. last year and uses lower frequencies with higher power densities.

The results, according to Levitt, are conditions similar to the intentional irradiation of employees at the U.S. Embassy in Moscow starting in 1953 during the Cold War.
"We're getting a mirror effect now, because the exposures close to cell towers now are almost identical in frequency, in signalling characteristics and in long-term low-level chronic exposure duration as that early microwave sickness paper from the irradiation of the Moscow embassy."
In 1978, researchers at Johns Hopkins University published a study on the long-term effects of that radiation exposure and found it led to several serious health problems. Among them: eczema, psoriasis, allergic and inflammatory reactions, neurological and reproductive problems, tumours and mood disorders such as depression, irritability and lack of concentration.
Levitt says these symptoms have been reflected in other studies on long-term exposure and have been seen in real-world practice.
"It is being increasingly reported when anyone looks at the symptoms that are being reported in populations that live near cell towers or low-level infrastructure."
The medical and scientific community is very much at odds over the impact of cellphone radiation. Health Canada maintains there is no problem.
"Health Canada has reviewed this article and has noted that no new data is presented," the department said in a statement to CBC News. "As well, the conclusions made by the authors are not based on a full examination of the scientific evidence."
Many of the studies cited in the article claim biological or harmful health effects may occur at radiofrequency levels below Health Canada's exposure limits.
"As long as exposures respect the limits set in Health Canada's guidelines, the department has no scientific reason to consider exposure to low-level radiofrequency fields, such as those from cell towers, dangerous to the public," the statement added.
Environmental Reviews is published by Canadian Science Publishing. Before it became private in September, the online publication was overseen by the National Research Council.
http://www.cbc.ca/news/cell-tower-radiation-harmful-to-humans-study-1.958047
Posted by EMF Refugee at Friday, November 05, 2010 No comments: Links to this post