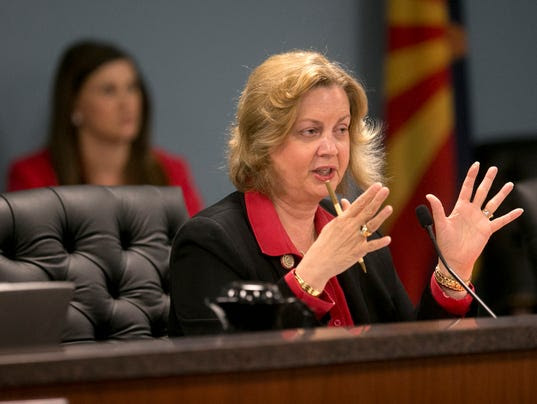 Susan Bitter Smith announced Thursday afternoon that she will resign from her seat on the Arizona Corporation Commission effective Jan. 4.

The Attorney General's Office filed a petition in Supreme Court Dec. 1 seeking to remove Bitter Smith from office. The action argues that because Bitter Smith works as the head of the Southwest Cable Communications Association, the state's conflict-of-interest law prohibits her from serving as a regulator on the Arizona Corporation Commission.

The Corporation Commission oversees electric, water and telecommunications companies, among other duties such as regulating securities and overseeing railroad crossings.

On Wednesday, her attorney filed a response to the court action seeking to remove her from her job, stating she has no conflict of interest by also working as a cable television trade group leader.

Bitter Smith said at a news conference this afternoon that she still wants the case to be heard by the court. She spent several minutes disputing the Attorney General's Office petition to remove her before announcing that she was resigning her seat.

She said the court action and media attention on the controversy has been too much of a distraction both to her work at the commission and at the cable association.

"I feel that this distraction will continue," she said. "The public deserves the full attention of the commission and its staff to the upcoming body of work facing the commission. Despite my great love for this job and pride in our successes, my overriding goal is to insure that the work of the people gets done with the appropriate attention it deserves."
Gov. Doug Ducey will appoint a replacement from Bitter Smith’s party to fill the commission seat. She is a Republican.

Daniel Scarpinato, spokesman for Gov. Doug Ducey, could not provide a timeline as to when the governor could appoint a replacement.

"This is an important position and Gov. Ducey will take a thoughtful approach to filling this vacancy,” Scarpinato said.

The appointee will serve the remainder of Bitter Smith's term, which runs through 2016. Next year, voters will elect three commissioners to the five-member organization. In addition to Bitter Smith's seat, Commissioner Bob Stump is terming out and Commissioner Robert Burns is up for re-election.

With reporting from Yvonne Wingett Sanchez.
Return to azcentral.com for further updates on this developing story.