Blue light makes the brain think it's time to wake up, just as you're getting ready for bed.
Olga Khazan, The Atlantic, Feb 24 2015

The answer to the question "How'd you sleep?" has, for most of human history, been "not too well." Even before the advent of electric light, people slept two or three to a bed, next to a chamber pot, and with a warmth-giving-yet-high-maintenance fire threatening to burn out a few yards away.

As Jon Mooallem put it in the New York Times magazine a few years ago, "In 1750, one writer described London between the hours of 1 a.m. and 2 a.m. as a ghastly encampment of 'sick and lame people meditating and languishing on their several disorders, and praying for daylight.'"


Picture caption: The elements of a changing world, from technology and business to politics and culture.

So the idea that smartphones and other electronic devices have interrupted centuries of blissful slumber is somewhat flawed. But to the extent that we rely on technology to make life better, one domain where it might be making things worse is, in fact, in the realm of sleep.

Smartphones do seem to be having an impact on how well we snooze, and this effect seems to be especially severe among young people. A 2012 Time/Qualcomm poll conducted with 4,700 respondents in seven countries, including the U.S., found that younger people were more likely to say that they don't "sleep as well because I am connected to technology all the time":
Percent Who Don't Sleep as Well Because of Technology 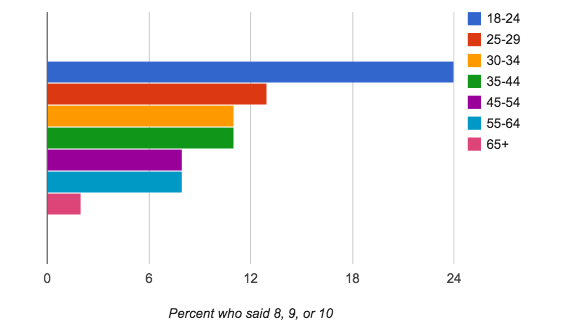 Percent of respondents, by age bracket, who said they agreed with the statement "I don't sleep as well as I used to because I am connected to technology all the time" at a level of 8, 9, or 10, with 10 points meaning it describes them exactly (Time/Qualcomm) This might be because young people are likelier to keep their phones within reach when they are trying to sleep:
Where Do You Keep Your Phone While You Sleep? 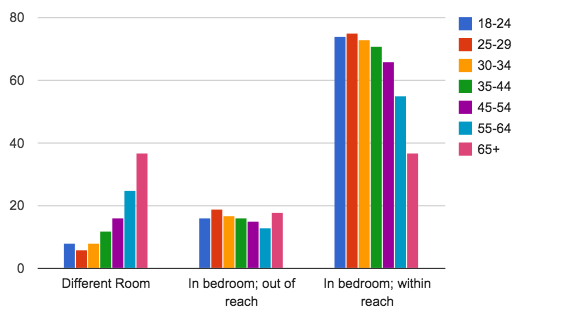 Time/Qualcomm Smartphones and tablets disrupt sleep, in part, because they emit what's known as "blue" light. This light is picked up by special cells behind our eyeballs, and it communicates to the brain that it's morning. (Red light, meanwhile, signals that it's time to go to sleep).
This video from Everyday Chemistry has a good explanation of how that works:
All of this blue light suppresses melatonin, a hormone that helps with sleep timing and circadian rhythms. At night, our melatonin levels are supposed to rise in anticipation of sleep. In 2013, scientists at Rensselaer Polytechnic Institute asked 13 people to use electronic tablets for two hours before bed. They found that those who used the tablets while wearing orange goggles, which filter blue light, had higher levels of melatonin than those who either used the tablets without goggles on or, as a control, with blue-light goggles on.
Melatonin Levels After Two Hours 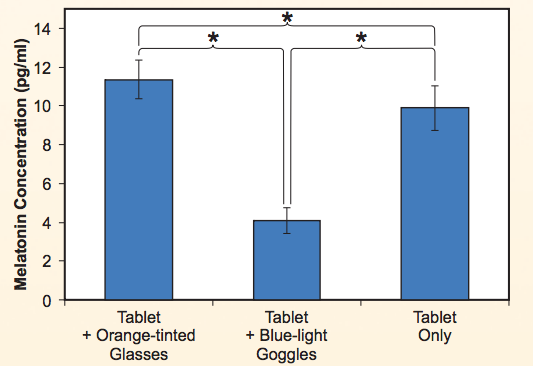 RPI
The harm caused by blue light has been replicated over and over. In another study, a group of Harvard researchers compared the effect of 6.5 hours of exposure to blue light, compared to similarly bright green light. The blue light suppressed melatonin for twice as long, and it shifted sleep schedules by three hours, compared to an hour and a half.
Even e-readers (the ones that light up, like the Kindle Fire) can mess with the body's sleep systems. A study published in the Proceedings of the National Academy of Sciences last year found that such e-readers not only suppressed melatonin, they reduced the total number of REM sleep minutes that participants got. REM sleep is considered the most restorative form of sleep.
REM Sleep with Print Versus E-Book 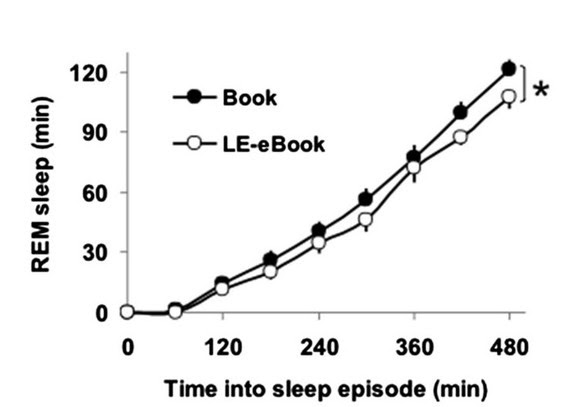 PNAS More recently, a study of Massachusetts fourth and seventh graders published in Pediatrics found that children who slept near a small screen and who had more screen time "were more likely to have perceived insufficient rest or sleep in the past week." Not only might the kids have been tempted to grab their phones in the wee hours and re-commence their game-playing and snap-chatting, but their devices might have been sounding with alerts throughout the night. The effects were more pronounced among Hispanic and African American children than among white kids:
Changes in Sleep and Bedtime in the Presence of Screens

Pediatrics "The irony of blue as an environmental agent is that before the industrial age, it was merely a color," wrote David Holzman in a paper on the harms of blue light recently. Eighteenth-century children may have had livestock mewling nearby as they slept, as Mooallem wrote, but at least they didn't have to contend with the scourge of blue light.
http://theatln.tc/1vHkT67--Joel M. Moskowitz, Ph.D., Director
Center for Family and Community Health
School of Public Health
University of California, Berkeley