The mountain of discarded refrigerators, cellphones, TV sets and other electrical waste disposed of annually worldwide is forecast to grow by a third in the next five years, according to a United Nations study. Picture: AP / Christian CharisiusSource: AP
LOVE your tablet and smart phone? The planet may not. The explosion in personal gadgets will result in a 33 per cent leap in electronic waste by 2017, a new report says.
It's a rise that poses mighty challenges for sorting and recycling, according to figures published on Sunday.
By the end of 2017, the total annual volume from refrigerators, TVs, mobile phones, electronic toys, computers, screens and other electrical or electronic cast-offs will reach 65.4 million tonnes, 33 per cent up on the end of 2012.
INFOGRAPHIC: Tracking the World's E-Waste
Much of the extra load will come from the incredible rise in popularity of personal computing devices which also double as fashion statements - such as tablets and smartphones.
The resulting mountain of e-waste "could fill a line of 40-tonne trucks end-to-end on a highway straddling three-quarters of the Equator,'' a UN study group says. That amount weighs about 11 times as much as the Great Pyramid of Giza.
Last year, around 48.9 million tonnes of e-waste was produced, an average of seven kilos - or the weight of eight bricks - for each of the seven billion people on the planet, it said. The report found that in volume terms, China in 2012 produced the biggest amount of e-waste that was put on the market - 11.1 million tonnes, followed by the United States at 10 million tonnes.
However, the world's two biggest economies were far apart when it came to the amount of annual e-waste per person.
The US generated the seventh highest amount of e-waste per person - about 30kg. Australians disposed of about 25.2kg of electronic junk each year. The country with the highest per capita e-waste was Qatar at 63kg per person.
China's per capita figure was 5.4kg.
Creating a worldwide tracker of electronic waste has not been easy. Different nations use different definitions - the United States categorises only consumer electronics such as TVs and computers while Europe defines e-waste as anything with a battery or power cord. Digital deluge ... Fashion items such as smartphones and personal tablet computers are expected to be a major component in the anticipated 33pc rise in electronic waste by 2017. Picture: AP Source: AP
"Although there is ample information about the negative environmental and health impacts of primitive e-waste recycling methods, the lack of comprehensive data has made it hard to grasp the full magnitude of the problem," says co-author Ruediger Kuehr.

The study, Quantitative Characterization of Domestic and Transboundary Flows of Used Electronics, found mobile phones constitute the greatest number of individual items - with an estimated 120 million collected - while TVs and computer monitors made up a major proportion of the total weight. 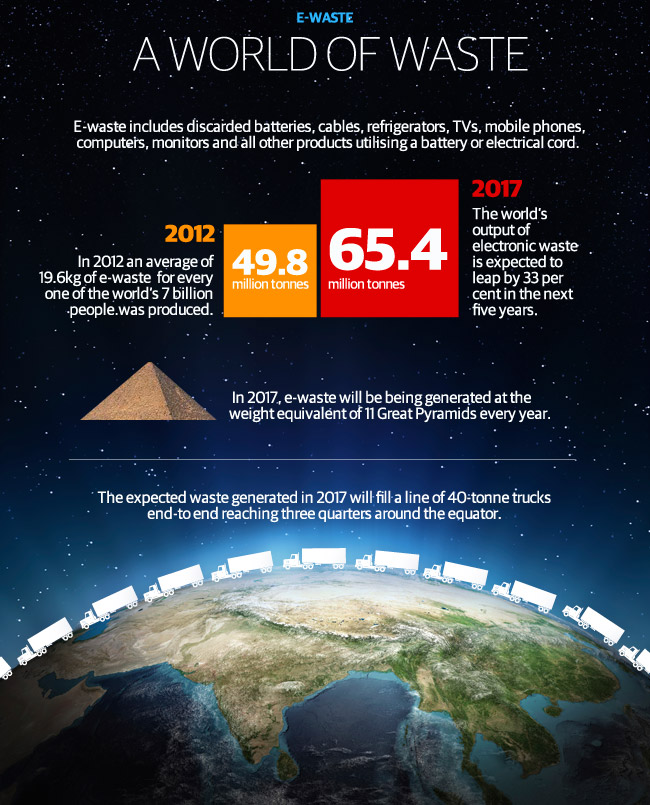 AUSTRALIA'S EWASTE: What you can do about it
The destinations of much of this hi-tech trash was also revealed.
Most larger electronic items, especially TVs and monitors, were exported to destinations such as Mexico, Venezuela, Paraguay and China while used computers, especially laptops, were sent to Asian countries such as Hong Kong, United Arab Emirates and Lebanon.
The main destinations for discarded mobile phones were Hong Kong and countries in Latin America and the Caribbean such as Paraguay, Guatemala, Panama, Peru and Colombia