When I was around 16-years-old, a friend of mine gave me a book called "Are You Sanpaku?" This introduced me to macrobiotics and the importance of having a balance of yin and yang in the diet. Sanpaku means "three whites" and is one of many traditional Eastern medicine diagnostic methods of checking the level of someone`s health. I have noticed that people on either really yin diets or really yang diets were often Sanpaku.

However, recently I have noticed that people who seem to use cell phones excessively and are exposed to high amounts of electromagnetic radiation may also be sanpaku. On a recent trip in Chile I met a guy from California, who was heavily into Macrobiotics. You would think that someone on a strict Macrobiotic Diet would not be sanpaku, right? Well, he was very sanpaku and admitted to me that he used his cell phone more than four hours a day. Perhaps these electromagnetic devices are sucking what the Japanese call Ki (気) and the Chinese call Qi (气) out of their bodies. It is believed in Eastern medicine that people with low 気 levels can also drain those around them of their 気. Or we could say that this unnatural electromagnetic radiation is similar to what is called bad Qi (邪気). 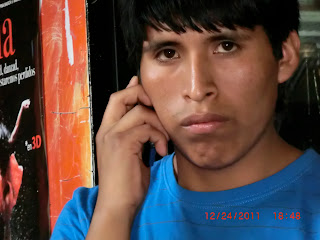 Of course, it is just a theory and there would have to be some so-called scientific proof to show this is true for people to not take it with a grain of salt. But that is where science originates -- from observation.

Reflections on why People with Sanpaku eyes might suffer from severe depression, memory loss, severe mood swings, and anger, or may even end up with a criminal record (including such offenses as rape).


Both the liver and gallbladder meridians pass through the frontal lobes which function in "complex problem solving and judging the consequences of behaviour" 8 which may therefore lead to irrational decisions and criminal offences. The meridians also pass through the sexual and adrenal organs and thus there may be excessive testosterone present and this may be why a wood imbalanced person becomes sexually deviant or goes to the extreme of rape.

JF Kennedy is an example of a wood imbalanced person with Sanpaku eyes. As president of the United States he must have been under tremendous stress. It is known that he took many drugs in the form of medication for back pain which would have effected his liver chi, had an adrenal disorder – Addison's Disease and was known to be sexually insatiable.

In Traditional Chinese Medicine, Wood is controlled by Metal in that Metal has the ability to chop Wood. Metal representing the minerals and electrolytes in the body which govern communication and include the nervous and endocrine systems of the body. Sanpaku eyes are formed by and thus involve the nervous system and people with Sanpaku eyes are under stress which also involves the endocrine and specifically the adrenal glands. A sanpaku person thus may have a lack of minerals in the body and/or may be suffering from adrenal exhaustion.

In summation a person with a Wood Element imbalance and Sanpaku eyes may end up with a criminal record, depression or mood swings because of the wood imbalance which may affect their emotions, nervous system, hormonal levels of adrenaline and testosterone and effect their level of reasoning as to what behaviour is acceptable.

WHY SO MANY PEOPLE TODAY HAVE SANPAKU EYES
"Many people nowadays have a very mild version of this condition, because the modern diet tends to be very yin / expanded. In a mild case, you may not see "three whites". But you can see that the bottom part of the iris is just at the level of the lower eye-lid. The condition is so common that George Ohsawa once remarked when he saw a crowd of people, "You are all sanpaku"6.

Sanpaku eyes are an external manifestation of an imbalance in the wood element . The wood element requires sources of energy coming from sunshine, fresh air, fresh nutrition, positive thoughts and sufficient rest and relaxation and also requires the ability to use this gained energy in an unfettered way such as the ability to express oneself freely and "space to unfold".

Imbalances in the wood element today can be said to be caused from eating "on the run" – food that is convenient; lacks vital energy, vitamins and minerals and is generally acidic. The food is also commonly full of additives such as preservatives, colouring, and flavouring. Our food is no longer ripened in the sun, it is grown with pesiticides, and fertilizers. In the case of meat, unnatural food sources are provided to the animal, and the use of hormones and antibiotics are common.

We consume more stimulants than previously such as tea, coffee, alcohol, concentrated sugars and use more medications, drugs, and cigarettes. We tend too spend much more time driving in traffic and thus inhaling noxious gases. We do not take sufficient time to rest and relax and thus become "stressed" which affects our hormonal system which in turn affects our other systems such as the digestive system, nervous system, cardiovascular system, and reproductive system and causes disturbances in those.

The wood element is thus not provided with the essential energy that it requires to create chi and function normally and yet it is asked to remove the toxic build-up within our systems caused by these unnatural substances that require the liver and gallbladder to do more work in detoxification of our bodies.

In more serious cases, where the "three whites" are clearly visible, this indicates very poor health and high levels of stress in the body. You may see this in cancer patients and others who are seriously ill, as well as drug addicts and alcoholics, or even among young children who take excessive amounts of sweets, soft drinks and chemicalised foods. 6

go on a cleansing program to assist in ridding of all the built up toxins,

eat food that is as natural as possible (organic),

eat fresh fruits and vegetables as these have an energy which is not contained in frozen or other type of foods,

take time to breathe in deeply - "fresh air", too many people shallow breathe,

spend a few minutes in the sun daily to take in its energy, before driving into deep traffic put your air on recycle so that you do not take in the fumes,

take care of your spirit as well as your body by taking time to release and let go of negative thoughts completely & creating positive thoughts - be thankful for all the good you enjoy,

Take time to really relax the mind and body and let go of stressors, without chemical assistance

Supplements/tonics which are good for the liver such as Milk Thistle, Dandelion Tea or Essentiale may be taken, fresh beetroot and carrot juice are excellent liver tonics

It is how we look after our lifestyles and specifically where we invest our energies and how and with what we replenish our energies that will determine how effectively we eliminate Sanpaku eyes.

many on the list may be aware of the japanese term "sanpaku".
this is used to describe eyes that (when looked at at eye level) show the white sclera, between the cornea and the lower lid. it is believed that this is due to a system imbalance and that people having such eyes meet tragic accidents and fatal tragedies happen to them. people like john f kennedy,marilyn monroe, robert kennedy had this sort of eyes.

it is also believed that macrobiotic diet can correct this imbalance and the tragic fatality can be avoided. some suggest chinese acupuncture and chiropractics to balance the system and correct this. some have opined that most of us are sanpaku or turn sanpaku when our systems are disbalanced.

a few links that I found in yahoo search :-
www.macrobiotic.org/Sanpaku.htm
www.leviticus11.com/sanpaku.htm

When a baby is born, the iris, or colored part of the eye, is usually beautifully balanced between the upper and lower eye lids. It touches the upper and lower lids, so that no white, or sclera, shows above or below. The sclera is visible only to the left and right of the iris. This indicates a balanced and healthy nervous system. The baby is alert and in generally sound health.

When a person dies, the iris rises so that it partially disappears under the upper eyelid. The white sclera shows below. In Oriental Medicine, we call such an appearance sanpaku, which means "three whites" showing. Three whites, or sanpaku, is common among those who are ill or exhausted. It is most severe among those who are gravely ill and approaching death.

Three whites show that a person's nervous system is seriously imbalanced. Such a person's mind, body, and spirit are out of harmony with the larger forces of the cosmos. The person's intuition is off; his or her ability to assess people and situations is weak.

Generally, there are two types of sanpaku. The first is yin sanpaku, white showing below the iris, which is very common, especially among drug addicts. Here, the iris floats upward, revealing the sclera below. The second type is yang sanpaku, white showing above the iris; here the iris sinks downward toward the bottom eyelid. This reveals a dangerous or violent character. Charles Manson has beautiful yang sanpaku eyes.

If the white shows below the iris, the condition is yin, indicating that the dangers come from outside. A person with yin sanpaku eyes will place himself or herself in dangerous or threatening situations unwittingly- and may not survive.

If the white shows above, the condition is yang, and the danger comes from within. A person with yang sanpaku eyes is extremely violent, filled with rage, and likely poses a threat to himself and others. He may destroy himself, but may also take others with him.

The macrobiotic philosopher George Ohsawa wrote a book called You Are All Sanpaku and dedicated it to John Kennedy and Abraham Lincoln, among others. Ohsawa said they were all seriously sanpaku and thus suffered from impaired judgment that indicated poor health and premature death. These people were excessively yin sanpaku. All of them accepted danger, but were unable to survive it.

Yin sanpaku, or white showing below the isis, is the result of excessive intake of yin substances, such as sugar, refined grains, alcohol, and medical drugs.

Yang sanpaku, or white showing above the iris, comes from excessive intake of meat, salt, and hard cheeses, and from indulgence in violence. Yang sanpaku shows a character that is self-centered and bent on fulfilling its own ambition, something without regard for the cost.

Balanced eyes, with the iris touching the upper and lower lids, reveal a balanced condition and sound judgment. Balanced eyes come from a balanced view of life and sound dietary habits, especially the consumption of whole cereal grains and fresh vegetables.

When former Indian Prime minister Indira Gandhi was killed, Time magazine published a series of photographs of her, including one taken just before she was assassinated. The picture clearly revels her yin sanpaku eyes, which reflected her condition and revealed that she was in danger.

Email ThisBlogThis!Share to TwitterShare to FacebookShare to Pinterest
Labels: sanpali