The human body normally functions by using natural electromagnetic energy and humans are electromagnetic beings. Thus we are affected by electromagnetic fields in our environment. People worldwide are reporting health issues and symptoms after exposures to electromagnetic fields.
“Common EHS symptoms include headaches, concentration difficulties, sleep problems, depression, a lack of energy, fatigue, and flu-like symptoms…The primary method of treatment should mainly focus on the prevention or reduction of EMF exposure, that is, reducing or eliminating all sources of high EMF exposure at home and at the workplace. The reduction of EMF exposure should also be extended to public spaces such as schools, hospitals, public transport, and libraries to enable persons with EHS an unhindered use (accessibility measure).”  – EUROPAEM EMF Guideline 2016 for the prevention, diagnosis and treatment of EMF-related health problems and illnesses (Belyaev 2016)

Clinicians have developed assessment tools and clinical protocols to assess and treat patients.
Please see the Patient Questionnaire on Electrical Sensitivity provided by Physicians for Safe Technology for an assessment tool to understand  EMF exposures.
The Austrian Medical Association Guidelines for Diagnosis and Treatment of EMF related Health Problems
The Austrian Medical Association has developed a guideline for differential diagnosis and treatment of health problems associated with outdoor and indoor electrosmog. Guidelines of the Austrian Medical Association for the diagnosis and treatment of EMF related health problems and illnesses (EMF syndrome)
5th Paris Appeal Congress, 18th of May, 2015 Royal Academy of Medicine, Belgium
Environmental idiopathic intolerance: what role for EMFs and multiple chemicals?
Electrohypersensitivity (EHS) and multiple chemical sensitivity (MCS)
Watch videos of lectures by the top experts in the field
In the video below Dr. Magda Havas lectures at National Institute of Environmental Health Sciences May 9, 2016. “Electrosmog, the missing link as it relates to cancer, reproductive problems and electrohypersensitivity.” 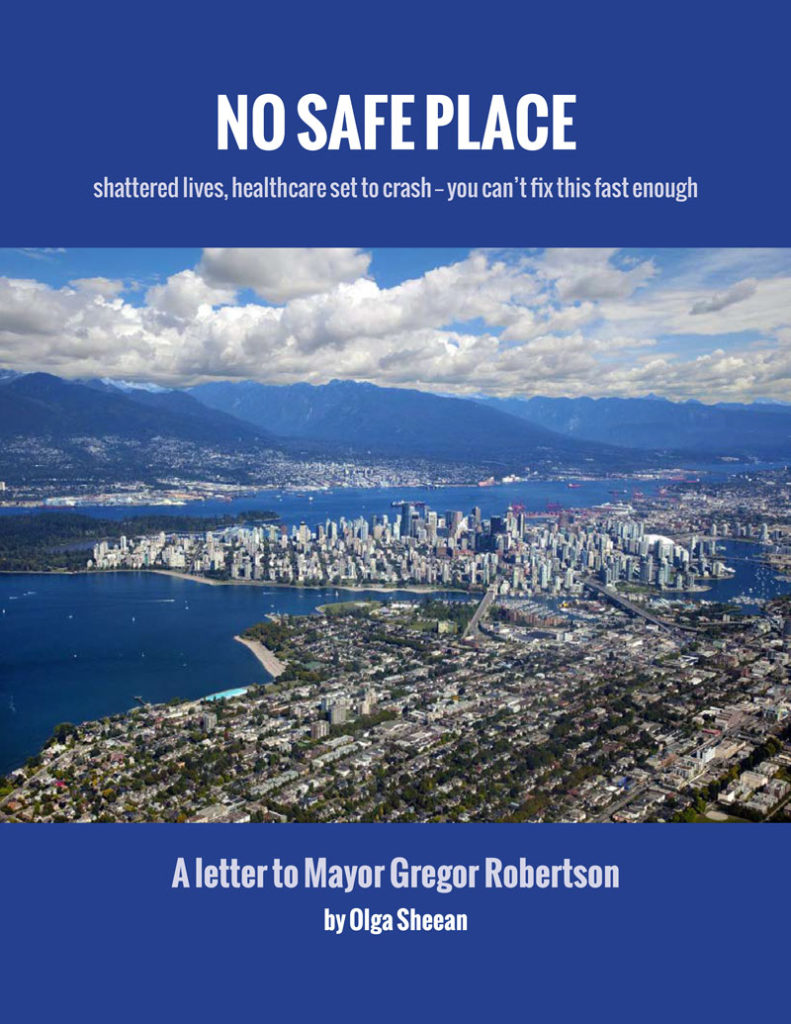 Doctor’s Working Draft Summary
Dr. Erica Mallery-Blythe has developed an excellent Working Draft: A Summary of EHS detailing the science and legal issues related to electrical sensitivity. Read it here.
History
What is the explanation for rashes from pulsed radiofrequency radiation? 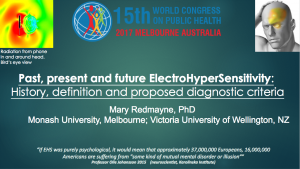 Recognition of the Electromagnetic Sensitivity as a Disability Under the ADA

The Architectural and Transportation Barriers Compliance Board (Access Board) is the Federal agency devoted to the accessibility for people with disabilities. The Access Board is responsible for developing and maintaining accessibility guidelines to ensure that newly constructed and altered buildings and facilities covered by the Americans with Disabilities Act and the Architectural Barriers Act are accessible to and usable by people with disabilities. In November 1999, the Access Board issued a proposed rule to revise and update its accessibility guidelines. During the public comment period on the proposed rule, the Access Board received approximately 600 comments from individuals with multiple chemical sensitivities (MCS) and electromagnetic sensitivities (EMS).
The Board has taken the commentary very seriously and acted upon it. As stated in the Background for its Final Rule Americans with Disabilities Act (ADA) Accessibility Guidelines for Buildings and Facilities; Recreation Facilities that was published in September 2002:
“The Board recognizes that multiple chemical sensitivities and electromagnetic sensitivities may be considered disabilities under the ADA if they so severely impair the neurological, respiratory or other functions of an individual that it substantially limits one or more of the individual’s major life activities. The Board plans to closely examine the needs of this population, and undertake activities that address accessibility issues for these individuals”.
Following its recognition of electro sensitivity and its declaration of commitment to attend to the needs of the electromagnetic sensitive, the Access Board contracted the National Institute of Building Sciences (NIBS) to examine how to accommodate the needs of the electro sensitive in federally funded buildings. In 2005 the NIBS issued a report.
View the report here

Go to top
DOCUMENT ON ACCOMODATIONS IN USA
MEMORANDUM OF THE UNITED STATES DEPARTMENT OF EDUCATION OFFICE OF SPECIAL EDUCATION AND REHABILITATION SERVICES ADMINISTRATION REHABILITATION SERVICES ADMINISTRATION WASHINGTON on page 8 it states suggested ways to accommodate which include “minimizing exposure to electromagnetic fields from computers, fluorescent light ballasts, and other equipment.”
Job Accommodations for People with Electrical Sensitivity Job Accommodation Network (JAN). Preparation of this item was funded by the Office of Disability Employment Policy, U.S. Department of Labor
9/2014: Los Angeles Unified School District Accommodated a Teacher Who Fell Ill After Wireless Installation. Read the Press release and watch the video of her testimony to the LAUSD School District Here. Read her letter of accommodation Here.
US Dept of Education, Office of Civil Rights updated guide to section 504 accommodations, updated Dec. 2016
While it does not mention EHS, it explains what rights a parent has regarding accommodations for impairments, what is considered an impairment, etc.  A must read before going for 504 accommodations.  ADA definition of disability not only includes learning, but also bodily functions and caring for oneself (see 4) below)  Also states that whether or not a student receives good grades is not a factor on whether a student should receive accommodations:
a) Grades don’t matter, only impact on major life activity, see p. 5 .
” School staff should note, in particular, that a student may have a disability and be eligible for Section 504 services even if his or her disability does not limit the major life activity of learning.
Therefore, rather than considering only how an impairment affects a student’s ability to learn, school staff must also consider how the impairment affects any major life activity of the student and, if necessary, assess what is needed to ensure that students have an equal opportunity to participate in the school’s programs.”
For example: (1) a student with a visual impairment
School staff should note that a student may have a disability and be eligible for Section 504 services, including modifications, even if the student earns good grades.
This is because the student’s impairment may substantially limit a major life activity regardless of whether the student performs well academically, and the student may need special education or related aids and services because of this disability.
b) Mitigating measures, see p. 6:
“Mitigating measures. When determining if a person has a disability, a school cannot consider the ameliorative effects of mitigating measures when determining how the impairment impacts the major life activities under consideration.”
if a person is taking mitigating measures to treat their impairment,  p. 20 of OCR guide:
“In other words, when a school district conducts an evaluation for disability, it is important to consider that mitigating measures can treat the impairment, thereby obscuring the substantial limitations of the impairment.Therefore, it is useful to have evidence showing that an impairment would be substantially limiting in the absence of the ameliorative (beneficial) effects of mitigating measures. For example, such evidence could include information about the limitations a person experienced prior to taking medication, or evidence concerning the expected course of a particular disorder absent mitigating measures (such as a student with a peanut allergy could stop breathing after contact with peanuts.) This is why it is also beneficial to involve parents in the evaluation process, to access such information that parents may have.
A student is not required to stop taking needed medication or using another mitigating measure in order to receive an evaluation.
Therefore, when determining whether a student with a health concern has a disability, the school district must evaluate whether the health concern (for example, a tree nut allergy or diabetes) would be substantially limiting without considering the beneficial effects (amelioration) of medication or other measures.
The federal Access Board contracted the National Institute of Building Sciences (NIBS) to examine how to accommodate the needs of the electro sensitive in federally funded buildings. The 2005 NIBS Report Indoor Environmental Quality (IEQ) report is here .
On p. 51-52:
” Cell Phones Turned Off: Protect those with electromagnetic sensitivities and others who may be adversely affected by electrical equipment.”
“Ability to turn off or unplug computers and other electrical equipment by occupant or staff: Protect those with electromagnetic sensitivities.”
“People with electromagnetic sensitivities can experience debilitating reactions… from electromagnetic fields emitted by computers, cell phones, and other electrical equipment. The severity of sensitivities varies among people with electromagnetic sensitivities…According to the Americans with Disabilities Act (ADA) and other disability laws, public and commercial buildings are required to provide reasonable accommodations for those disabled by electromagnetic sensitivities. These accommodations are best achieved on a case-by-case basis”
Go to top

Expert Report of Andrew A Marino: The peer reviewed research of electromagnetic sensitivity, Testimony August 8, 2016
The European Union’s European Economic and Social Committee has urged continuance of the precautionary principle through regulation and advisory work. They adopted an opinion on electromagnetic hypersensitivity syndrome (EHS) The European Union’s European Economic and Social Committee (EESC) Draft Opinion on electrohypersensitivity.
A mother takes it to court: A Montreal lawyer has filed a discrimination complaint against the Public Health Department (PHD) of Montreal and the Quebec government who refuse to give him and his three children reasonable accommodations due to EHS. Read it here.
Australia, 2013, Court Case Won: McDonald and Comcare: The AAT ruling means McDonald will continue to be paid 75 per cent of his salary, as compensation for his illness. Read news coverage here
Read about a Federal Complaint filed against a US School for ADA Violations by Parents of A Electrically Sensitive Child 8/2015 Initial Press Release HERE. Full Complaint. Experts LettersAmended Complaint 12/2015
French court recognizes EHS as a handicap: BBC NEWS
December 2016: France orders removal of Smartmeter because of electromagnetic radiation
High Court of Madrid Ruling Recognizes “Electrosensitivity” as Grounds for Total Permanent Disability – Towards Better Health, 4th August 2016
Legal Ruling (in Spanish

Electrosensitivity caused by chronic nervous system arousal – Dr Roy Fox
Is Wi-Fi making your child ill?: As France bans Wi-Fi in nursery and primary schools, a British expert who has given up using wireless gadgets says we should do the same. The Telegraph
What It’s Like to Be Allergic to Wi-Fi NY Magazine By Alexa Tsoulis-Reay
The Town without WiFi, Washingtonian Magazine
Notre Dame Magazine I Am an EMF Refugee
Allergic to Wifi? Meet a group of people who say they absolutely are – Fox 8, 8th May 2017

Email ThisBlogThis!Share to TwitterShare to FacebookShare to Pinterest
Labels: EHS