Study warns of higher ME rates among pupils


Study warns of higher ME rates among pupils

More children than previously thought miss school because of misdiagnosed chronic fatigue syndrome, according to research 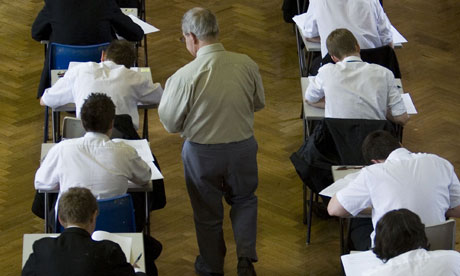 Chronic fatigue syndrome is more common in schoolchildren than was previously thought, according to reasearch. Photograph: Rex Features
Far more children than previously thought miss a lot of schooling because of chronic fatigue syndrome which has not been diagnosed, according to research.
The illness is identified as a significant source of absenteeism and the study suggests more efforts need to be made to identify sufferers. Around one in 100 secondary age pupils suffer from the condition, also known as myalgic encephalomyelitis (ME), the findings in the medical journal BMJ Open claim. With 3.3 million pupils in state-funded secondary schools in England, that means that 33,000 children aged between 11 and 16 may have it, according to calculations done for the study. This is far higher than two previous surveys which estimated that just 0.06% of schoolchildren have chronic fatigue and another which found only seven sufferers among 8,839 children in 10 schools. The new figure is also higher than estimates of 0.1% to 0.5% for the prevalence of ME generally.
The conclusions are based on a study of 2,855 pupils aged 11-16 at three secondary schools in and around Bath, of whom 461 had missed 20% of their lessons, or at least a day a week, over a six-week period. Some 315 of the 461 had an identified reason for such regular absenteeism, such as a medical illness, a bout of ill-health or persistent truanting, and three of the 315 had already been diagnosed as having CFS. Of the 146 others who had unexplained absence, 112 attended a school clinic for an assessment, and of those 48 were then invited to a specialist CFS/ME clinic, of whom 42 attended. Two of those had also been previously diagnosed with CFS, though their school had not been told, and a further 23 were also diagnosed as having the illness.
That gave a total of 28 pupils out of the 2,855 who were classed as having CFS, or a rate of 1%.
"This project suggests that undiagnosed chronic fatigue syndrome/ME may be an important and under-appreciated cause of school absence in children aged 11-16 years," said the authors, led by Dr Esther Crawley. She is a consultant senior lecturer at Bristol University and a paediatrician who runs the country's largest clinic for young people with CFS, at the Royal National Hospital for Rheumatic Diseases in Bath.
"GPs have always thought that this is really rare in under-16s. But this paper shows that it's not that rare," said Crawley. Schools should assess pupils who are missing 20% or more of days, consider CFS as a likely cause and refer them to a specialist service, she added.
Schools should start screening pupils who miss at least 20% of lessons for signs of CFS, especially as the average length of time between the onset of symptoms and diagnosis is 22 months, she added.
A spokeswoman for Action for ME said: "Dr Crawley's findings suggest that many more pupils than previously estimated may have ME. We estimate that there are 250,000 people in the UK with ME and that as many as 25,000 of these are children and young people. The youngest person to be diagnosed ever in the UK was two."
The Department for Education reacted cautiously to the findings, believing it unwise to draw any conclusions about the picture nationally from a study of just three schools, especially with a condition that is hard to diagnose accurately.
A spokesman said: "Absence from school, even for one day, is hugely detrimental to pupil's prospects. Where there is an underlying medical problem, schools and the local authority should work with parents to minimise the impact of the long term illnesses on a pupil's education."
Peter White, a professor of psychological medicine at the Barts and The London School of Medicine and Dentistry at Queen Mary University of London, said: "This well-conducted study shows that schoolchildren who miss school without explanation fall between the stools of school and the health service, and do so for two main reasons: emotional ill-health and chronic fatigue syndrome (CFS).
"Both of these can delay or even prevent a child from reaching their educational and personal potential."

Ruth Haughton fell ill just before taking her GCSEs. "I initially got glandular fever three weeks before my GCSEs in May 2005, when I was 15, and that mutated into ME. I was diagnosed within eight weeks, which is unusually quick. The exam board said that I had to try to take at least one of my exams. I ended up taking three but, because I was bedbound with severe muscle fatigue, I had to take them at my kitchen table, as I couldn't leave the house. I was pretty delirious, in a feverish stupor, and could barely read. I think I got ill because I'm a perfectionist and was pushing myself to get an A-star in all my 10 subjects. But it then took me three years to get just one A-level, in art, and I had to abandon my ambition of doing medicine." I'm now doing the foundation year of a geology degree instead. Yes, ME was devastating for me. But it's also brought some positives, like teaching me that I can't push my body too hard or it will break."
http://www.guardian.co.uk/society/2011/dec/12/chronic-fatigue-syndrome-schools
Posted by EMF Refugee at Tuesday, December 13, 2011