Radiation is the likely cause, reports our correspondent from the American Society for Reproductive Medicine 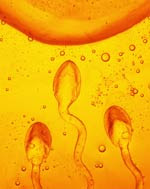 MEN who are heavy users of mobile phones have significantly lower sperm counts than those who are not, according to research that suggests radiation from handsets could be damaging male fertility.

Both the quantity and quality of a man’s sperm decline as his daily mobile phone use increases, a study of 361 infertility patients in the United States indicates.

The greatest effects were seen among very heavy users who talked on a mobile phone for more than four hours a day. They produced about 40 per cent less sperm than men who never used a mobile phone at all. Smaller falls in sperm count were also found among those who used the phones less frequently.

The findings, from a team led by Ashok Agarwal, of the Cleveland Clinic in Ohio, could indicate that the electromagnetic fields generated by mobile phone handsets are interfering with sperm production.

Previous studies have shown that close and heavy exposure to this form of radiation damages sperm in the laboratory, though an effect has never been demonstrated convincingly outside this environment.

Other researchers, however, cautioned that the study showed only an association between mobile phone use and sperm counts, but established no causal link. It was more likely that heavy phone use was linked to another factor, such as stress or obesity, which was responsible for the effect, they said.

“The findings seem pretty robust, but I can only assume that mobile phone use is a surrogate for something else,” said Allan Pacey, senior lecturer in andrology at the University of Sheffield. “If you are holding it up to your head to speak a lot, it makes no sense it is having a direct effect on your testes.

“Maybe people who use a phone for four hours a day spend more time sitting in cars, which could mean there’s a heat issue. It could be they are more stressed, or more sedentary and sit about eating junk food getting fat. Those seem to be better explanations than a phone causing the damage at such a great distance.”

Dr Agarwal, who presented the results yesterday at the American Society for Reproductive Medicine conference in New Orleans, said that they were worrying because of the wide extent of mobile phone use. “Almost a billion people are using cell phones and the number is growing in many countries at 20 to 30 per cent a year,” Dr Agarwal said.

“People use mobile phones without thinking twice what the consequences may be. It is just like using a toothbrush but mobiles could be having a devastating effect on fertility. It still has to be proved, but it could have a huge impact because mobiles are so much part of our lives.”

In the study, 361 men whose sperm was being analysed before fertility treatment were asked about their mobile phone use, and split into four groups: those who never used a phone, those who used a phone for less than two hours, two to four hours, and more than four hours a day.

Median sperm counts were measured at 85.89 million per millilitre for non-users, 69.03 million for the second group, 58.87 million for the third and 50.30 million for the fourth. Sperm motility, or swimming ability, also fell as phone use increased, as did other measures of quality.

The results are similar to a previous study by researchers at the University of Szeged, in Hungary, which suggested a 30 per cent reduction in sperm count among men who kept a mobile phone on standby in their trouser pockets. The research, however, failed to control for lifestyle.

Such controls are important because sperm production is sensitive to a number of factors, including obesity and heat: lorry drivers and travelling salesmen, for example, tend to have low sperm counts because the long hours that they spend sitting increases the temperature of their testes.

Dr Agarwal said that if the effect was caused by mobile phones, several explanations were possible. Studies have shown that electromagnetic fields can damage Leydig cells in the testes, and mobile phones are also known to cause a heating effect on tissue that may be hazardous to sperm. Both phenomena occur over short distances, so holding a phone to the head while speaking should not be dangerous.
Posted by EMF Refugee at Thursday, July 19, 2007