The Citizens Initiative  West , which was established after the installation of the T-Mobile transmitter on the bank building (in Lindauerstraße) is now able to present the first results of the blood tests. Unfortunately, the results confirm the fears of the Initiative.

All 28 participating residents had already removed DECT-Telephones and WLAN from their homes weeks before the first blood sampling took place and also reduced their mobile phone use to a few conversations outside home. Furthermore, 6 families had the electromagnetic exposure in their houses measured by technician Herr W. Jogschies, Wildpoldsried, both before and also after the installation of the transmitter mast. The second test results showed a several fold increase in the electromagnetic RF radiation exposure (the medical team has the measurements).

At the suggestion of Dr. med. M. Kern, the initiator of the `Allgäuer Doctor’s Initiative’, and of alternative practitionerE. Strodl, the citizen’s initiative decided to investigate the effects of the telecommunications mast on diverse laboratory parameters. At the same time, this series of analyses is part of a German-wide investigation into the effects of mobile telecommunications on humans (Dr. med. Hans-C. Scheiner in  (München). The organisation, implementation and medical supervision of the project Suburb and the first summary of the results were handled by physician Anna Blanz.

It is established that both, the “mood hormone” serotonin and also the “sleep-“ and “immune defence hormone”melatonin is formed in the pineal gland of the brain, whereby serotonin represents a precursor of melatonin.

In healthy conditions a maximum of the sleep hormone melatonin is formed from serotonin during the night, whilst, during the daytime, the ‘mood hormone’ serotonin is shown to be clearly increased, at the expense of the then severely reduced amount of the ‘sleep hormone’, melatonin.

At the same time, melatonin represents one of the most important immune enhancing substances of our body and, as a free radical scavenger, it protects all body- and brain cells against genetic damage considered as a precursor to cancer.

Serotonin acts especially as a messenger for the nervous system and in the brain as a mood hormone. A reduction of the serotonin level is therefore associated with depression, lethargy and listlessness, inner agitation and many psychiatric disturbances.

The evaluation/analysis of 25 study participants (13 women, 9 men, 3 young people) who all live within a radius of 15-300 metres of the telecommunications mast produced the following results:

Melatonin in the Urine:
Only 8 out of 25 participants (28%) at the initial testing exhibited initial blood levels which were in the region considered to be normal. It was therefore a group of people that had already been pre-exposed.

For 7 of 25 participants (28%), there was an increase, in most cases, within a region considered to be severely pathological.

Only one out of 25 participants (4 %) with normal initial level exhibited an increased level of 6-OH-M-S at the 2nd [blood] test.

The paradox increase in the daytime melatonin levels reflects the general tendency to marked daytime tiredness of people exposed to radiation.

Melatonin levels clearly increased on average by about 4.5 times of the initial level for all 25 participants.

This effect is shown below based on the mean value (of 25 participants).

Graph
Melatonin in the serum 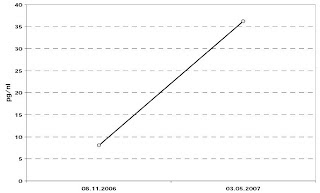 Serotonin in the blood:
At the second measurement 21 of 25 participants (=84%)presented a reduction of the ‘mood hormone’ serotonin (in the daytime blood serum) by an average of 46.3%.
Of these, 10 participants showed a decrease of about 50% and above, with a maximum serotonin decrease of up to 68 %. For 3 participants it remained unchanged, for 1 participant the level was slightly increased.

The following graph shows this change based on the mean value of 21 participants:
Graph 2
Serotonin in the Serum 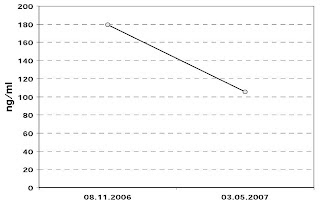 Summary Evaluation of the Results:
Especially alarming is the fact, that 84 % of participants, almost the whole group, reacted with a massive decrease in the serotonin level (average 46%) following increased exposure from the operation of the newly erected telecommunications mast.

The clear increase in depressive mood disturbances, lethargy and listlessness, appetite disturbances, inner agitation and reduced quality of life experienced by nearly all nearby residents must be acknowledged by orthodox medicine

Alarming is also the fairly steep nightly melatonin decrease in the presence of increasing telecommunication signal exposure, which is nearly half of the normal level for more than half of the group (56%). Even the slow increased tendency of nearly one third (28%) represents ultimately, despite a slight increase, only an upturn within a mainly deeply lowered pathological region.

We therefore have to expect considerable sleep disturbance and immune deficiencies in 84% (28 plus 56%). Since, from the medical viewpoint, sleep disturbance is increasingly seen as a cancer promoting risk factor, these numbers must be considered as alarming
The increase of the daytime melatonin level, that is also normally substantially lower in comparison to the nocturnal melatonin peak, also indicates a displacement of the flattened nocturnal distribution graph in the morning direction. Normally, the level increases about 1-2 hours after going to bed, it reaches a maximum between 2 a.m. and 3 a.m. and then drops off again steeply until the morning hours.

The blood sampling took place in the morning between 8 a.m. and 9 a.m. All participants went to bed the night before at the latest by 11 p.m. This increase indicates, in addition to the nocturnal melatonin reduction, also a displacement of melatonin excretion in the morning direction.

That means:
1. relative melatonin deficiency at night with shortened phases of deep sleep. This is indicated by restless sleep with frequency awakening and

2. increased melatonin level at the tine of arising from bed. It is symptomatic of this, that one has difficulty getting out of bed in the morning and feels “absolutely whacked”. During the day, consecutive symptoms appear, such as tiredness, irritability, loss of concentration etc. Actually, 16 participants complained about sleep disturbances, 6 complained that they were regularly awakened between 2 a.m. and 4 a.m. and that they then had difficulty getting off to sleep again.

Since the group of participants had no other obvious change in their living conditions, apart from the operation of the mobile telecommunications mast with the measured, appreciably increased radiation exposure, it must be assumed that there is a direct relationship.

Since the medically conducted tests carried out on residents living in the vicinity of the commissioned operational telecommunications mast proves a drastically increased health risk, immediate action by political and regulatory authorities , at the municipal, provincial- and federal level are demanded.

In order to prevent further endangerment of the health of residents, the medical point of view is that the operation of the telecommunications mast must immediately be stopped!